Yekom has extensive experiences in design and construction supervision of access roads to irrigated areas as well as inside irrigation networks and farm and service roads.

The type of roads, which we have been involved in are mostly in rough and undulating lands and gorges of storage or diversion dams. Yekom is capable to design revetments and protection embankments for roads and railroads as well as river crossing bridges. An example of road engineering works we did is in Amir Kabir and Mirza Kouchak Khan Sugarcane Industries Development areas. This project included 45 km of main roads, over 700 km of inter-farm roads, and over 100 km of railway roads. Also, Yekom has the experience of ring road layout and design for the large city of Sari, Iran. 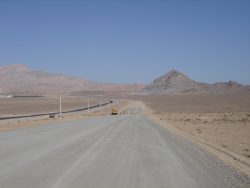 During the recent years, Yekom has provided management consultancy services for numerous road and transportation projects including highways, tunnels, bridges, and underpasses with municipality districts of Tehran Great City. The variety and number of projects we have been involved in municipality works have given us a particular experience of working in crowded and congested urban areas.

Having the aforementioned background, Yekom offers comprehensive design and construction supervision of road and railway transportation services in not only urban and rural areas but also in undulating and mountainous areas.

Please rotate your device to have a better experience.

Browser upgrade is needed for having better experience.